Would you talk to your loved ones through a glass plate? 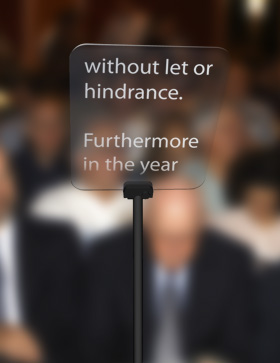 The Party conference season is over for another year. But it set me thinking. I went to the IOD Annual Convention at the Royal Albert Hall recently, where the line up of speakers was stellar. Boris Johnson, George Osborne,Chuka Umunna, Ana Botín, Richard Branson, Terry Smith and quite a few more.

These are all highly intelligent and charismatic people in their different and unique ways.And one thing above everything else separated them into 2 groups. Not their talent, not their beauty nor their fame – it was the Autocue- and those who used it and those who didn’t.

I reckon that people use an Autocue for one of two reasons. First – when they have to stay “on message”. When what they say has been crafted and sculpted by speechwriters and advisors and when a copy of what they are going to say- or have just said- is given to the press. This largely applies to politicians, less so business people. It is very hard to do well, as many politicians regularly demonstrate,  and takes practise. The one person who used Autocue really well at the Convention was Chuka Umunna. But then he is a shadow minister! He used it “as if ” not using it. He was enthusiastic and clear and engaging- but he is a rare example of success.

The second main reason that some use an Autocue is because they don’t feel there is an alternative. They feel they need either the script, or a raft of slides to act as their crutch and aide memoire. The downside is this. Unless you use it REALLY well, however good the  pauses and the clarity of diction, we the audience KNOW that you are reading it. You’re reading off a glass plate. The illusion it attempts to create is that you are looking at and talking and connecting directly with us. But you’re not. You’re reading it – and it takes a lot of practise to read a speech or talk well. Most busy people do not take the time to master and practise it, and don’t do it enough to warrant that investment of time. And even if they do- there is STILL a glass plate ‘twixt you and your audience, and you fail to connect with them as they deserve.

So what to do? “Simples” as the meerkats would say.Rather than script out everything- know what your introduction will be. And the purpose of your talk. And your ending. Make your notes pictorial versus wordy. Symbols and pictures and diagrams, however crude and inept you think  they may be, work far more powerfully than words as a memory prompt. Avoid listing them down a page- but spread them out radially from the centre of the page, and use plenty of highlighter colour and “cloud like” lines to surround each topic or point. A bit like a mind map- but better!

I can give you but a flavour in this brief article. It reads like a shameless plug, but I describe the technique in illustrated detail in my book Blow Your Own Horn, and the Kindle version has the illustrations in colour.

If you create your “notes” as I describe , it will transform your ability to connect and engage with your audience. The thousands I have worked with bear testament to this. You’ll slash your preparation time, you’ll never lose your place , and you’ll say all you want to say. And you will CONNECT. Do give it a go.