Worried about the rise of the robots? 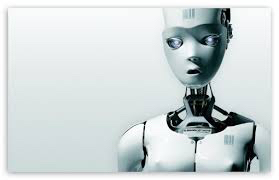 Some say this is the single most important challenge that we face as a species.

St Francis of Assisi said something like ” God, let me change what I can, accept what I cannot change ; and give me the grace to recognise the difference.”

This is Tom Whipple writing in The Times about something that most of us probably cannot change. It’s already happening.

“You would struggle to say that the University of Cambridge’s replicating robot is especially good at walking. In fact, as it flollops around in circles on a table in the engineering department, you could make the case that it is quite bad.

Because this one not only reproduces, it also evolves, and in doing so it finds itself flolloping into an academic debate that is about far more than making better robots, but is instead about whether better robots could one day lead to the end of humanity itself.

Along the road from Cambridge’s Department of Engineering, is another department, with a somewhat less prosaic name: the Centre for the Study of Existential Risk (CSER). Headed by Lord Rees of Ludlow, the astronomer royal, its remit is to look into dangers that may be unlikely, but that threaten our own existence. Last year, alongside its work on nanomachines and extreme climate change, the centre received a new brief: consider a robot apocalypse.

Artificial intelligence (AI) researchers have a term for when we first make a robot that is cleverer than us, and is able to make copies of itself that are cleverer still. They call it the Singularity. Like the cosmological singularity that produced the big bang, from this single moment onwards — which some say is 25 years away, others 125 — robot intelligence will expand exponentially.

The consequences will be profound. Demis Hassabis, CEO of DeepMind, an AI company recently bought by Google, says that it is in one sense the only challenge that matters. His goal is to “solve intelligence and use it to solve everything else”. Equally though, there are downsides. How will  humans react when every job can be done better by a robot? How will our economy even work when, at last, the prophesies of the Luddites have proven correct?

Then there is also the existential question. Why should we presume that the robots we designed would want to keep on an aristocracy of lazy, stupid, humans? The questions sound outlandish, but serious people are now considering them. “We don’t want this to be like climate change, where we ignore the question until it is so serious it is too late,” says Huw Price, Bertrand Russell Professor of Philosophy at Cambridge and a co-founder of CSER. His concern is in how to ensure that any artificial intelligence is motivated in a way that aligns with our own interests……..

Professor Price points out that even prosaic robots can have unintended consequences, citing an example first posited by Nick Bostrom, a philosopher working on the same problems at Oxford. “What about if there was some mistake? Imagine an intelligent paper clip factory, motivated to make paper clips. Imagine it discovers it can make lots more paper clips, but does so at the expense of the oxygen in our atmosphere. Maintaining a breathable atmosphere would not be a variable anyone thought to specify.”

The issue of artificial intelligence and the Singularity is one that divides opinion. Some think it could be the most pressing problem humans face this century. Equally, some think it is not worth worrying about in the lifetime of our grandchildren. Most agree that, at some point at least, humans will have to consider what it means to coexist with robots of vastly superior intellect.

For Professor Price, the even more important question is what it means for robots to coexist with humans of vastly inferior intellect. In the best case, he argues, we incorporate artificial elements into ourselves and “the robots are what we become”. He calls this “extinction by enhancement”. In the worst case, we have “extinction by replacement” — they outcompete us, and leave their human creators behind.

There is also an intermediate outcome that is arguably even more depressing: irrelevancy. “That is when we coexist on the planet, but the robots find they have other things they want to do with the world,” said Professor Price. “The worry is that we become a bit like gorillas are now.”

Ouch. Or Crikey. Terrifying or exciting. The Chinese curse of “May you live in interesting times” has rarely seemed more prescient.

Yet until the robots arrive – there is one thing that doesn’t and won’t change….the importance and the power of communicating and presenting face to face. It’s arguably  the most important skill in life. Yet many ignore the chance to improve and hone this most vital of abilities.

And it is something that most of us can get a little better at, and many of us improve exponentially.

If you haven’t read them yet, do download a copy of The 13 Secrets of Powerful Presenting. They will help you to stand out from others- with ease and even grace.

(With grateful thanks to Tom Whipple and Times Newspapers – whom I hope will forgive me.)