The contagious madness of the new PC 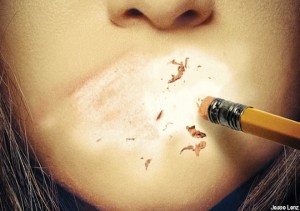 Most of us probably  think of ourselves as intelligent,educated, and well able to converse with others of our species. As human beings we start communicating whilst still in the womb, we learn to speak in early childhood, and the process and the learning continues.

Though something happens once we start work. We take on the “professional speak” of our chosen career – be it finance, law, medicine, economics, accountancy, retail…choose your genre! Most sectors have a language and jargon all their own…..reverse yield gaps, strategic frameworks, additionality, reverse optimisation, portals, platforms, structural deficits, structured products, negative growth…these are all examples of language used by my clients. Trying to wade through this minefield of linguistic horse poo is a challenge – both for those who use it and for those who have to endure reading or listening to it.

Many of us have become prisoners of the notion that a simple style reflects a simple mind. Yet if you listen to recordings of great speeches or read the transcripts, you notice immediately the lack of jargon and the power and simplicity of the language. Skilful – certainly. Eloquent – mostly. Moving  – often. Finely honed – frequently. There is often a nobility and transparency and a power when these people speak. And you will notice that a Mandela, Blair, Churchill, Luther King, Clinton,Lagarde or Obama never use jargon. Because it gets in the way. It obscures and muddies and excludes.

Apart from the virus of professional jargon, there is another pernicious trait that is widespread and growing. It is pernicious, because not only does it often require a language if its own, it seeks to censor thought and expression in an Orwellian way. Here are some parts of an excellent article by Mary Wakefield in a recent issue of the Spectator.

“ It’s becoming pretty clear, as the year rolls on, that some of our brightest youngsters have gone round the bend. It’s as if they’ve caught a virus, a mental one,a set of  thoughts and ideas that might loosely be called political correctness, but seem to me weirder and more damaging than that.

Back in the 1990s, PC students would stamp about with placards demanding equal rights for minorities and talking about Foucault. This new PC doesn’t seem to be about protecting minorities so much as everyone, everywhere from ever having their feelings hurt. It came from America, this virus, incubated in the closed minds of the Land of the Free, but it’s here now, and contagious.

We have a right not to be offended, think these kids, but this has horrible implications, as Brendan O’Neill pointed out in his Spectator cover story ‘The Stepford students’ last year. Brendan arrived to speak in defence of abortion at Christchurch, Oxford, only to find his debate had been cancelled. Why? Because it was offensive and might damage the ‘mental safety’ of students to hear ‘a person without a uterus’ speak on abortion. What about free speech? Overrated, said the students. Just an excuse for bigots.

Students have also decided they need protecting from disturbing bits in books. There have been recent calls for content warnings – ‘trigger warnings’ – to be inserted in great books. The Great Gatsby ( because it’s misogynist), Huckleberry Finn (racist), and The Merchant of Venice ( anti-Semitic). ………..Here’s how twisted it’s all become: in December, Jeannie Suk, a professor of law, wrote a desperate piece for the New Yorker about the situation at Harvard, a sort of SOS.

Her students , she said, had complained to the authorities that rape law was too ‘triggering’ to be taught at all. One girl thought the word ‘ violate’ – as in ‘does this violate the law?’  – too traumatic to use in class. Surely some sensible top dog told them all to belt up? Nope, said Suk. The hounding that would follow on social media was too alarming a prospect. Nor, as far as I can see, did anyone remind these kids that there are real victims of real rape out there who will need lawyers.

…….the PC way of thinking is unhinged too. If someone feels slighted then no other arbitration is needed. Emotion is everything. If offence has been taken, an offence has been committed. But this is the thinking of paranoiacs and phobics. It’s to confuse reality with perception…..

One of the allures of the new PC world must be the thought that you’re particularly ‘caring’. But this too is deluded. Is it selfless to pose as a hero on social media , to accuse some poor don of racism for teaching Huckleberry Finn? It’s an unpleasant irony that a gang which purports to be so sensitive feels no qualms about destroying the lives of the inadvertently offensive.

There are other ironies to the new PC. My favourite is that this daft bunch, who insist they’re quite sane, are demanding padded cells. Universities must provide ‘safe spaces’ in case a ‘triggered ‘ individual needs respite from a frightening lecture , on Shakespeare , say. The safe space at Brown University contains cookies, Play-Doh and videos of puppies. I feel triggered just thinking about it.

And elsewhere, in the world beyond the safe space, the real victims of trauma – child soldiers, Isis prisoners, the people of North Korea – go unnoticed and unchampioned by these bright young things who should be fighting their cause.”

Let a great Frenchman have the last word: 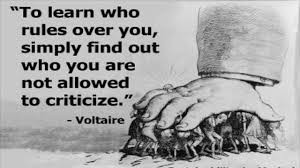 ( with huge gratitude to Mary Wakefield and The Spectator magazine)